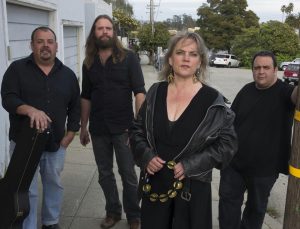 Carie and The SoulShakers are an elixir, a potion, an aphrodisiac.

Carie Anne MacAlpine with her voice and Vinny Johnson with his guitar, are the primary chemists. They are the medicine woman and man for an aching soul or a broken heart. Their numerous performances in the Bay Area have ulminated in the the building of an electric and ecstatic altar where band, fans and newcomers become the congregation. Attend! you will dance. You will sing. You will be overcome by the soul. The grit will get you. You will not be the same.

Johnson and MacAlpine found instant chemistry from the start. In the fall of 2013, MacAlpine had been discouraged by not finding a sound she imagined. She approached local guitar veteran, Johnson, to seek his help in closing out two of her remaining year end shows before she quit the music scene. A year later the two had written more than a dozen songs, produced an EP, gathered a stellar line-up of fellow musicians, and racked up prominent gigs in the Monterey Bay area.

Press and music critics call their sound “New Orleans Soul with Memphis grit,” “Soul-blues of the highest order,” and “deeply sensual.” Often compared to Tracy Nelson, Cold Blood, Dead Weather, and even Angela Strehli with Danny Gatto. The SoulShakers “will rearrange your molecules.”

Visit Carrie & The SoulShakers on the web