Sam Carlino, Sr. and his brothers, Vic, Joe, Chuck, Steve and Pete, got an early start in the food business, opening a fruit and vegetable stand together out on Monterey Highway in December, 1938, and running it until the beginning of World War II. After the war, the brothers formed a partnership and opened the Time Market on Bascom Avenue in San Jose.
As proprietors of the famed Time Market, the Carlinos served the community with produce, fresh meats and gourmet grocery items not available anywhere else. The market was known as much for the friendly and personalized service as it was for the quality and uniqueness of the merchandise.
Sam Carlino, Sr. sold his share of the business to his brother Joe in 1979, who later sold the market to the Jussen family. The shop is still in operation today as the Time Deli.
Sam Carlino, Jr. began his food career at age 8, helping his father make Italian sausage in the Time Market meat department, and later became a journeyman meat cutter for Zanotto’s Market.
In 1992, father and son opened Sam’s Bar-B-Que on Bascom Avenue, and have since continued the Carlino tradition of excellence in the food industry.

We’re honored to have had some very nice things said about us over the years. We’d like to share some of them with you here. 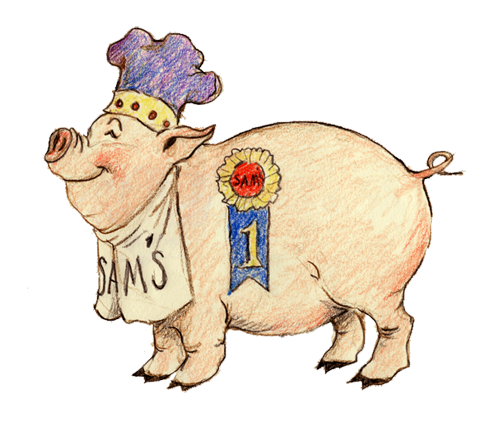 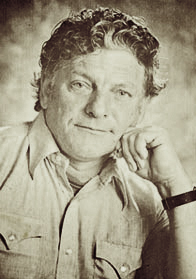 All pig-related artwork on this site was drawn by the talented hands of Arthur Boos, famous for his pastel and ink drawings of scenes from the 19th and early 20th century.
Known for his unique ability to capture the atmosphere of another time and place, Arthur Boos portrays his subjects with a rare compassion and understanding, and delineates character with a sure hand.
Arthur Boos’ skill and sensitivity are the result of a lifetime of travel, experience and observation. He has been a merchant seaman, sign painter, army sargent, lumbermill worker, sky diver, skin diver, motorcycle racer, hardwood floor finisher and Lover of Life.